You are here: Home / Soccer Formations Football and Soccer 7

This section was created to gather in a single space the explanations of the most clear form possible of the different systems of game anf formations of both Football 7 and Football 11.

During a Football match there are phases of attack and defense continuously, between the attack phase and the defense phase or vice versa, there is the phase of transition between the two. For each of the phases to be successful requires a collective organization in the teams, there must be a distribution of players’ roles that balances the team in both defense and attack. If a team consists only of players with a lot of offensive power but when they are in the defense phase they are not able to recover the ball the team will probably be doomed to failure, the same case of failure would occur in a very powerful team in defense And capable of recovering the ball but are null in the attack phase and unable to score a goal.

The game systems allow us to organize the collective game of the team by assigning an appropriate and logical position on the field of play to each player, thus avoiding the occurrence of tactical imbalances. It is important to study the characteristics of the players that make up our team in order to be able to decide with the results of this study what is the most appropriate game system that we must pose in order to try to achieve an effective collective organization that allows later to develop a balanced tactical system Of results in both the defensive and offensive phases.

For each Formation we discuss their advantages, disadvantages, requirements and instructions for their application.

If you want to collaborate by contributing some analysis or suggestion to our page do not hesitate to send it to us at info@futbolsiete.eu we will study if it can be published and we will include it mentioning you as creator of it.

We hope your collaboration !! 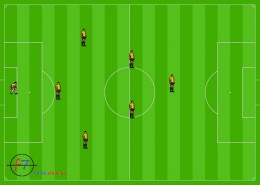